Selling Glasgow to Australia with help from Tourism Austria

Selling Glasgow to Australia with help from Tourism Austria 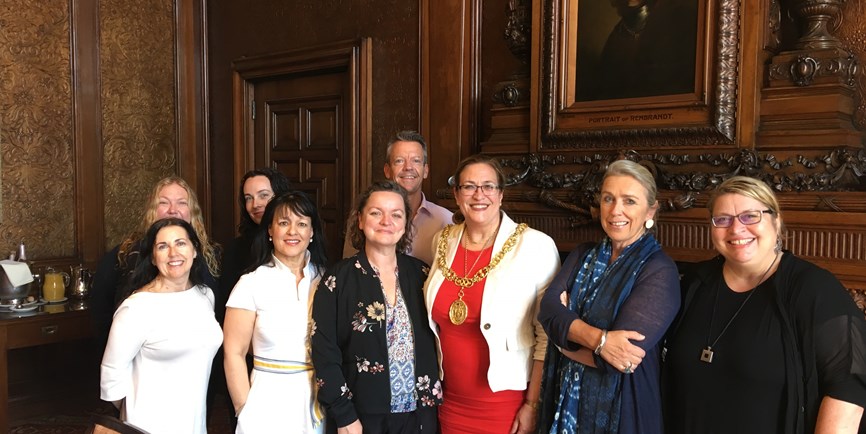 Glasgow Life and Austrian Tourism came together at the end of June to co-host a media visit for a group of influential Australian journalists. Aimed at showcasing Glasgow and Vienna’s distinct, but complimentary, cultural tourism offers, the nine-day trip was split between both cities.

Australia has been identified in Glasgow’s Tourism and Visitor Plan to 2023 as one of five core international visitor markets for the city, alongside the USA, Canada, Germany and France. The latest available data shows that Australian visitors make 45,000 trips to Glasgow annually – a figure which is growing year-on-year – and are among the biggest international spenders; boosting the city’s economy by some £22m.

Glasgow and Vienna share cultural strengths in music, art, heritage, architecture and food and drink; for example Glasgow is a UNESCO City of Music, the only one in Scotland and one of just two in the UK, while Vienna’s historic city centre is a UNESCO World Heritage Site.

Generating coverage in target Australian media outlets which profiles Glasgow’s credentials as Scotland’s cultural powerhouse and the ‘gateway to Scotland’ – a must-visit destination and the perfect touring base from which to explore the country more widely – is at the heart of Glasgow Life’s international city marketing strategy.

The five-strong group of travel, culture, food and music journalists, who collectively write for some of Australia’s leading publications including the Sydney Morning Herald, The Australian, The Age, Australian Traveller and Qantas’ inflight magazine, enjoyed a packed itinerary in Glasgow.

Staying at Native Glasgow, the city’s first dedicated apart-hotel which opened last year and has proved hugely popular with Australian visitors, the trip included a visit to the Clydeside Distillery; afternoon tea at Mackintosh at the Willow; a tour of Tennent’s Brewery’s new £1m visitor centre; a city bus tour with City Sightseeing Glasgow; a visit to Platform street food market at The Arches and dining at Red Onion, Hutchesons, Oran Mor, Cail Bruich, The Gannet, Five March and Bo & Birdy.

The group also enjoyed taking in a couple of music gigs in the city; a Mackintosh walking tour led by the Charles Rennie Mackintosh Society; visits to Kelvingrove Art Gallery and Museum; Kelvingrove Park; Glasgow Women’s Library; the University of Glasgow; The Hunterian Art Gallery and Museum; and the Riverside Museum, before meeting Glasgow’s Lord Provost, Eva Bolander and exploring Glasgow City Chambers.

Additionally, the group had the chance to meet with Duncan Dornan, Head of Glasgow Life’s Museums service, to discuss the city’s ambitions for the re-opening of the Burrell Collection. Other meetings took place with Richard Parry, Director of the biennial Glasgow International festival, which returns next year; Glasgow businesswoman Celia Sinclair, founder and Chair of the Willow Tea Rooms Trust which was responsible for the spectacular £10m Mackintosh at the Willow project; and Craig Tannock, owner of five city venues including Mono and Stereo, on the explosive growth of Glasgow’s vegan dining scene.

Glasgow’s Lord Provost, Eva Bolander, said: "If we’re to achieve our target of attracting one million more tourists by 2023, then it’s crucial that we continue to tell Glasgow’s story to the world and position the city as the gateway to Scotland.

"A key element of this is our international city marketing strategy, which is anchored in working collaboratively and innovatively with industry, national and international partners, like Austrian Tourism, to market Glasgow as an outstanding global city – one that’s welcoming, vibrant and culturally rich with an unrivalled visitor experience and world-class customer service."

Director of the Austrian National Tourist Office based in Sydney, Astrid Mulholland-Licht, said: "Hosting Australian travel journalists in Europe is usually a complex undertaking that requires long-term planning and considerable funding due to the expense of long-haul airfares.

"It therefore makes sense to create win-win partnerships between destinations so that the media collaboration becomes not only a more attractive proposition to top writers – allowing them to visit two different countries, cultures and cities as part of one trip – but it also helps to share the cost between hosts and showcase a common thread.

"Vienna and Glasgow are both vibrant, welcoming destinations, full of music and art. It was fascinating for media to explore their shared connection, for example the influence of Glasgow’s own Charles Rennie Mackintosh on the Vienna Secession."