‘Introducing Glasgow’ as the UK’s best staycation city in 2020

‘Introducing Glasgow’ as the UK’s best staycation city in 2020 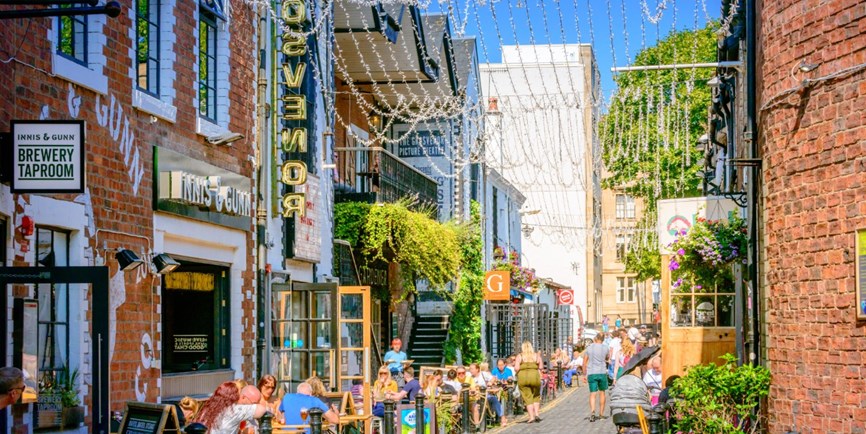 Built around a new TV advert and digital video content showcasing the breadth of the city’s unique appeal, the ‘Introducing Glasgow’ campaign will run from now until March.

It is focussed on attracting more ‘staycation’ visitors from across the north of England; principally Manchester, Liverpool, Newcastle, Preston and Carlisle.

Produced in collaboration with local agencies Frame and The Forest of Black, it also brings Glasgow’s distinct and much-loved character as one of the world’s friendliest cities to life.

Phase two will specifically target audiences in Liverpool, reflecting the launch of TransPennine Express’ new direct rail service between the two cities, and will include high-profile Glasgow advertising on the largest outdoor digital screen in Europe, outside Liverpool’s Lime Street Station.

Pre and post campaign research will be undertaken to evaluate its effectiveness and to inform future campaign priorities and activity across the year.

Glasgow’s appeal as a must-visit destination was evident throughout 2019, with the world’s leading media and travel brands – from Time Out and TripAdvisor to Condé Nast Traveller and Lonely Plant – continuing to praise the city for its unrivalled visitor experience.

Having been voted the world’s best Festival and Event Destination at the prestigious World Travel Awards, Glasgow was also named the European Capital of Sport for 2023 and the UK’s leading cultural and creative city last year.

2020 marks a major milestone for Glasgow as it has been 30 years since the city was crowned European Capital of Culture in 1990 – and major international events, including EURO 2020 and COP26; the UN Climate Summit, will ensure the eyes of the world are firmly fixed on the city again this year.

Councillor David McDonald, Chair of Glasgow Life and Depute Leader of Glasgow City Council, said: “Inspiring visitors from across our key UK market through innovative and relevant destination marketing is a priority action within Glasgow’s Tourism and Visitor Plan.

“We’re focusing on cities in the north of England with this new campaign as the significant market research we’ve undertaken across the UK found that our messaging and city proposition really resonates with those audiences and they’re more likely to book a trip to Glasgow in the short-term.

“We know that digital video content is one of the strongest sources of travel inspiration so we’ve developed a campaign and a suite of assets that will bring Glasgow’s visual identity to life for those audiences; through the channels where they’re most-likely to consume it.

“It’s about harnessing Glasgow’s unique character and reinforcing the distinctness of our place, people and personality – in addition to our outstanding tourism products – to ensure Glasgow stands out from its competition.”

You can view the new TV advert on PEOPLE MAKE GLASGOW’s YouTube channel. Glasgow Life is also encouraging viewers and the city’s wider tourism industry to share it on their own social channels using the hashtag #NextStopGlasgow.