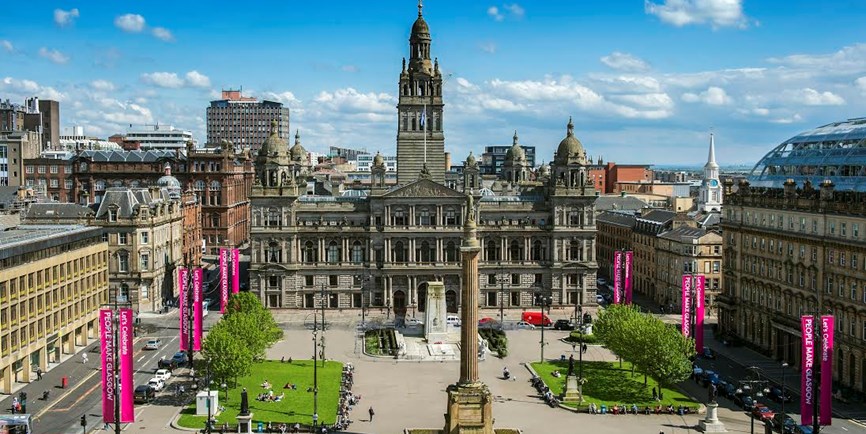 Now ranking number 4 in the world, Glasgow has been recognised as one of the world’s leading cities for sustainable business tourism by the Global Destination Sustainability Index after climbing 3 places and increasing its overall score by 16% on last year.

Glasgow Convention Bureau has been awarded the “Best Improved Destination” Award at the International Congress and Convention Association (ICCA) Congress in Prague after it scored an impressive 94% - a 30% increase on last year’s convention bureau performance.

This follows on from the launch of its People Make Glasgow Greener campaign in May this year and the recent announcement that it had become the first convention bureau in the UK to win a Green Tourism Award, the largest certification programme of its kind.

The GDS-Index promotes the sustainable growth of international meeting destinations and responsible business tourism best practices.  It evaluates the performance of cities on four key areas:

Aileen Crawford, Head of Conventions at Glasgow Convention Bureau, commented, “Glasgow is working towards becoming one of Europe’s most sustainable cities by 2020 and in order to maintain our position as one of the world’s premier conference destinations we recognise the importance of enhancing our sustainable business tourism offering.

Glasgow is at the forefront of developments in the energy, sustainability and low carbon industries and in turn, this has had a hugely positive impact on the volume of conferences we’re attracting in these sectors.

This is a fantastic achievement for the city which would not have been possible without the collaboration between the city’s tourism and hospitality sectors, academic and business communities, and local government partners. It’s hugely motivating to see our efforts in this area being recognised.”

Guy Bigwood, Director of the GDS-Index, commented “The judges and I were incredibly impressed at the remarkable efforts, creativity and progress made by the Glasgow team. Glasgow demonstrated that change can happen quickly if the Destination Management Organisation takes an active lead in bringing stakeholders together to collaborate and fast-track environmental, social and economic action in their cities."

Andrea Nicholas, Managing Director at Green Tourism, said, “Green Tourism is very proud to be working in partnership with Glasgow Convention Bureau to help increase responsible tourism in the city.  Aileen and her team have worked extremely hard to ensure that green and sustainability best practise is a key part of how the bureau operates and influences businesses in Glasgow and their prominent position on the Global Destination Sustainability Index is a true reflection of their leadership in this growing market.”

Glasgow is one of the world’s leading conference destinations and, today, business tourism contributes significantly to the city’s economy. In the 2016/17 financial year, Glasgow won over 500 new international and UK conferences through to 2023 worth £142 million – the city’s best ever annual return. Glasgow Convention Bureau is the city’s primary point of contact for conference organisers, working with partners on over 100 bids for major UK and international conferences each year.

Glasgow Convention Bureau has been recognised as the UK’s Best Convention Bureau for the past 11 years in a UK-wide poll conducted by the influential industry magazine, M&IT. Since first winning the M&IT title in 2007, Glasgow Convention Bureau has worked with industry, academia, city and national partners to deliver over £1 billion worth of business to Glasgow. That equates to securing more than 3,500 domestic and international conferences, with some 1.3 million conference delegates having spent more than four million nights in the city’s hotels.

The Global Destination Sustainability Index (GDS-Index) is a prize-winning grassroots Scandinavian initiative that evolved into the first-ever sustainability ranking for event destinations worldwide. A collaborative partnership between ICCA, European Cities Marketing, IMEX and MCI Group, it aims to promote the sustainable growth of international meeting destinations, highlighting best practices and responsible business tourism. In a world increasingly focused on responsible business and addressing our environmental impact, the GDS-Index helps destinations to engage clients with sustainability, align with the UN Sustainable Development Goals and drive the adoption, promotion and recognition of sustainable practices in their city. Find out more at www.gds-index.com.

‘Glasgow is open’ campaign launches to locals and day visitors