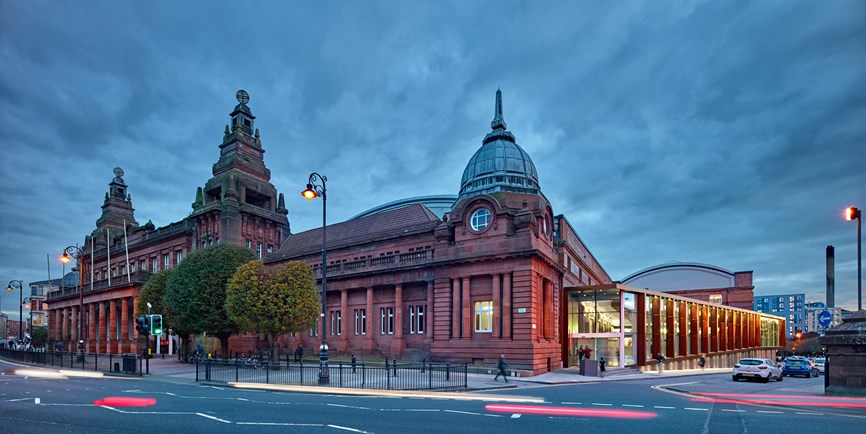 Glasgow’s Kelvin Hall has won a Gold Award from the Green Tourism Business Scheme (GTBS) for its ‘impressive’ sustainability practices across the venue.

Launched in Scotland in 1997, for more than 20 years the Green Tourism Business Scheme has been encouraging people and businesses to adopt sustainable choices that reduce their impact on the planet. With more than 2000 members across the UK, Ireland, Canada, Italy and Zimbabwe, it’s now the world’s largest eco-certification programme of its kind.

The ongoing £35 million refurbishment of Kelvin Hall is a multi-partner project being delivered by Glasgow City Council, Glasgow Life, the University of Glasgow and the National Library of Scotland.

Completion of phase one of the project in 2017 has breathed new life into the building; transforming it into a centre of cultural and sporting excellence which attracts around 12,000 visitors each week.

In its assessment, the GTBS praised Kelvin Hall for its commitment to sustainability and accessibility, stating: “Kelvin Hall has made a very impressive start. It’s no easy feat to gain a Gold Award at the first attempt, but a real effort has been made to embrace sustainable practices through the incorporation of new technologies into this refurbished iconic 1920’s Glasgow building.

“This includes a sophisticated building management system, which efficiently controls heating and humidity and is particularly relevant for the building’s multipurpose use in hosting numerous precious artefacts and collections from the University of Glasgow, Glasgow Museums and the National Library of Scotland.

“Best practice is also demonstrated when it comes to accessibility. The adaptable facility caters for a wide range of disabilities, making it one of Glasgow’s, and Scotland’s, leading venues in this respect. As the building expands in size and functionality in the coming years, it will no doubt deliver more green innovations; providing a first-class visitor experience while ensuring operating costs are kept to a minimum.”

Glasgow Life’s Area Cluster Manager, Brian Ashburn, said: “I’m delighted that Kelvin Hall has received the GTBS Gold Award. When we joined the programme we established a green team with representatives from across the project partners and earning this accolade reflects the hard work and commitment shown, not just by that team, but by everyone that works in the building, over the past 12 months. It’s a great platform from which to build our relationship with the GBTS and make Kelvin Hall even more sustainable going forward.

“It also comes on the back of Kelvin Hall having recently received the Cycle Friendly Employer Award from Cycling Scotland and we’re looking to further reduce our carbon footprint by offering free bike maintenance classes to our staff as well as a programme of cycling events over the coming months. We’ve also been working closely with Ricefield Chinese Arts and Cultural Centre, based in the city centre, on developing a sustainable travel plan and will be looking to continue strengthening our partnerships with local user groups in the future.”

The National Library’s Moving Image and Sound Collections Manager, Ruth Washbrook, said: “It has been a pleasure to work in partnership with the other tenants of Kelvin Hall to make it the greenest space possible. We want to make this the best possible visitor attraction for all abilities, and show that increasing access to the Library’s Moving Image Archive and digital collections does not have to come at the cost of environmental efficiency.”

The award for Kelvin Hall follows recent recognition of Glasgow’s wider commitment to becoming one of Europe’s most sustainable cities by 2020 and a leading destination for sustainable business tourism.

In November 2017, Glasgow Convention Bureau, which competes globally to bring conferences to the city, became the first convention bureau in the world to win a Green Tourism Business Scheme Award while the Scottish Event Campus (SEC) retained its GTBS Gold Award in December last year. At the same time, the city climbed to 4th place from 7th on the Global Destination Sustainability Index (GDSI).

‘Glasgow is open’ campaign launches to locals and day visitors