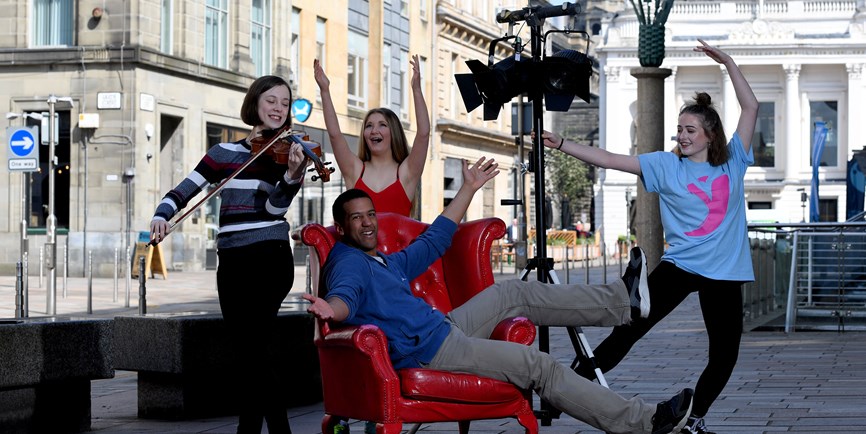 Scotland’s four youth performing arts companies will collaborate to present a brand-new commission for Festival 2018. This new piece of work, entitled Tell Us Who We Are,is the first time these four companies have come together to collaborate on one production.

In Tell Us Who We Are, the young people question and explore who they are as millennials within society. Through the prism of war, they contrast their lives to all of the young people who have lived in the century following the end of World War One. They have all the world’s information they could ever need at the touch of a button but now, in the Year of Young People, they want to know what the world thinks of them and if they’re voice is being heard.

Featuring performance, dance and new music, the young cast will be joined by a 40 strong choir and a community cast to inhabit the iconic space of the Old Fruitmarket venue. Working with arts professionals and writer Gary McNair, the collective have developed this piece to reflect, represent and celebrate the voice of young people today.

Tell Us Who We Are is part of Festival 2018, the cultural programme for the Glasgow 2018 European Championships.

Minister for Early Years, Maree Todd said: “It is very exciting to see all four youth performing arts companies collaborating for the first time.  I am sure that they will put on a truly innovative production and make a marvellous contribution to Festival 2018.

“It is particularly fitting that these performances will take place during Scotland’s Year of Young People, which aims to inspire Scotland through its young people, celebrating their achievements and creating new opportunities for them to shine.”

Depute Leader of Glasgow City Council, Cllr David McDonald said: “Festival 2018 is an incredible opportunity to showcase the artistic talent that exists in Glasgow and across Scotland – and it is really encouraging to see so many young people, in particular, take that chance.

“I’m excited to see how this unique collaboration develops. It will undoubtedly be a real highlight.”

WEBINAR: Economic Outlook for Scotland and the UK