Glasgow Life recently undertook activity in Tokyo to capitalise on the official opening of The Burrell Collection: A voyage to impressionism: vision of a great ship-owner collector at Bunkamura Museum of Art in Shibuya on April 26th.

Organised by Glasgow Museums with major Japanese newspaper Mainichi Shimbun as the sponsor, the stunning exhibition of 73 masterworks of French paintings from the Burrell Collection along with seven supporting works from the city’s Kelvingrove Art Gallery and Museum will be at Bunkamura until 30 June.

It will then move on to the City Museum of Art, Shizuoka (August 7th to October 20th) before completing its tour of Japan at the Prefectural Museum of Art in Hiroshima (November 2nd to January 26th 2020).

The Burrell’s tour of Japan kicked off at the Prefectural Museum of Art, Fukuoka from October 12th to December 9th last year.  Thereafter, it moved on to the Museum of Art, Ehime until March 24th before arriving in Tokyo.

A third of the Japanese population lives in or around Tokyo, on the Kanto central plain.  More than 1-in-2 visits from Japan to the UK originate from Kanto, which includes the Greater Tokyo area.

The Japanese outbound market is forecast to continue to grow, and should reach over 30 million staying visits abroad by 2025.

The UK, their 5th most popular destination in Europe in 2017, is set to benefit from this positive trend and see visits from Japan grow 17% by 2025. 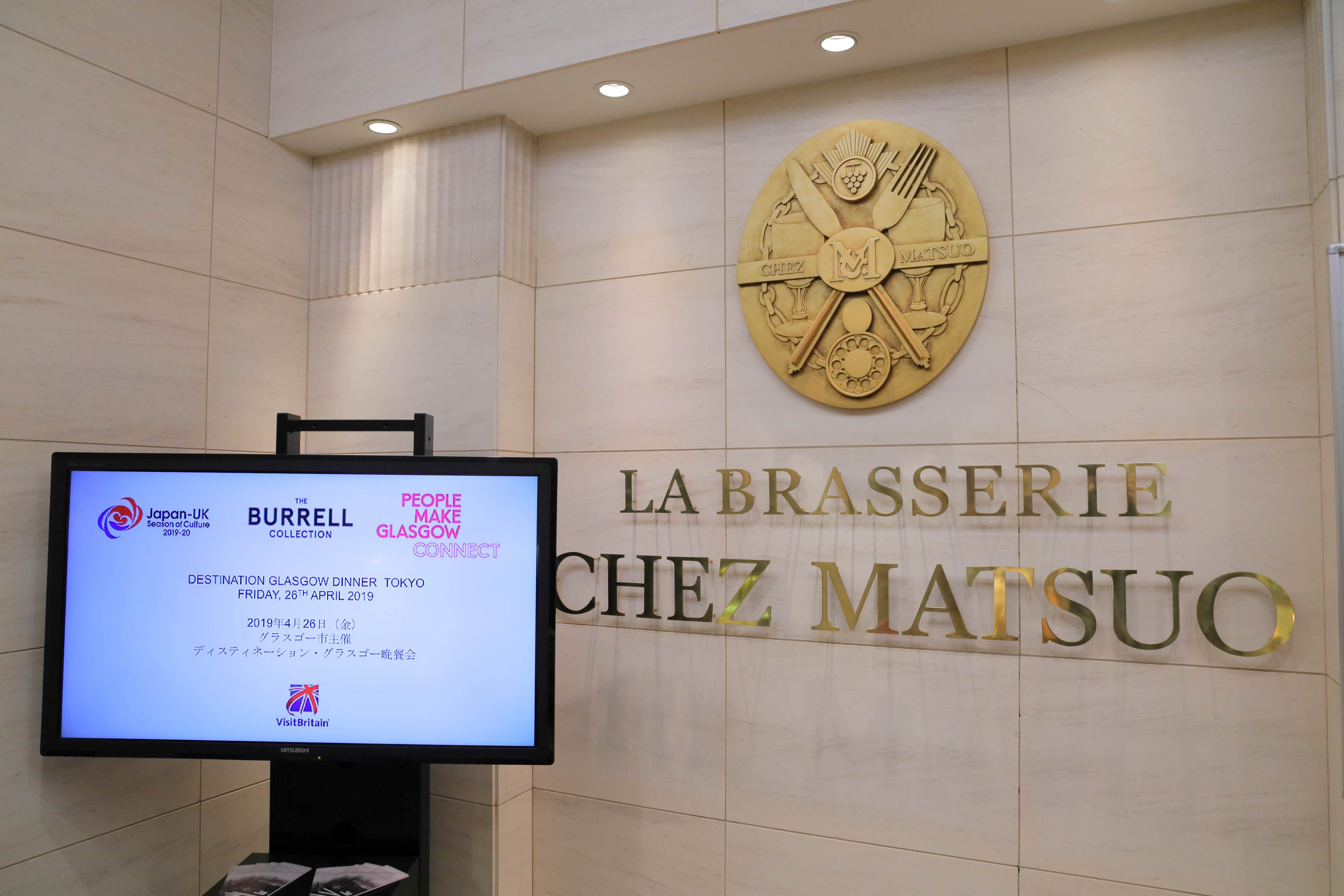 Glasgow Life invited 25 guests to the Burrell exhibition launch at Bunkamura and thereafter to a Destination Glasgow Dinner hosted by Glasgow Life’s Chair, and Deputy Leader of Glasgow City Council, Councillor David McDonald at the nearby Chez Matsuo.

Councillor McDonald who is also a Member of the Burrell Renaissance Board was invited to speak at the exhibition opening and presented at the Destination Glasgow Dinner on the Burrell Collection and the city’s attributes as a world-class visitor destination.

He said: “Glasgow is Scotland’s cultural powerhouse. As a UNESCO City of Music and one of the world’s top five sporting cities, Glasgow is home to world-class museums, galleries and attractions; a rich architectural heritage; a thriving and diverse food and drink scene; and an outstanding programme of events and festivals which is recognised globally.

“With so much on offer in Glasgow, it’s easy to see why we welcome over two million tourists every year, who make a significant contribution to our economy.

“However, we’re not a city that’s standing still and we want to continue to grow our tourism economy and attracting more Japanese visitors.”

The Destination Glasgow Dinner was attended by Japanese guests drawn from travel trade, media, business, culture and inward investment sectors as well as partner agencies Scottish Development International, VisitBritain and the British Council.  The event was also recognised by the Japan-UK Season of Culture 2019-2020. 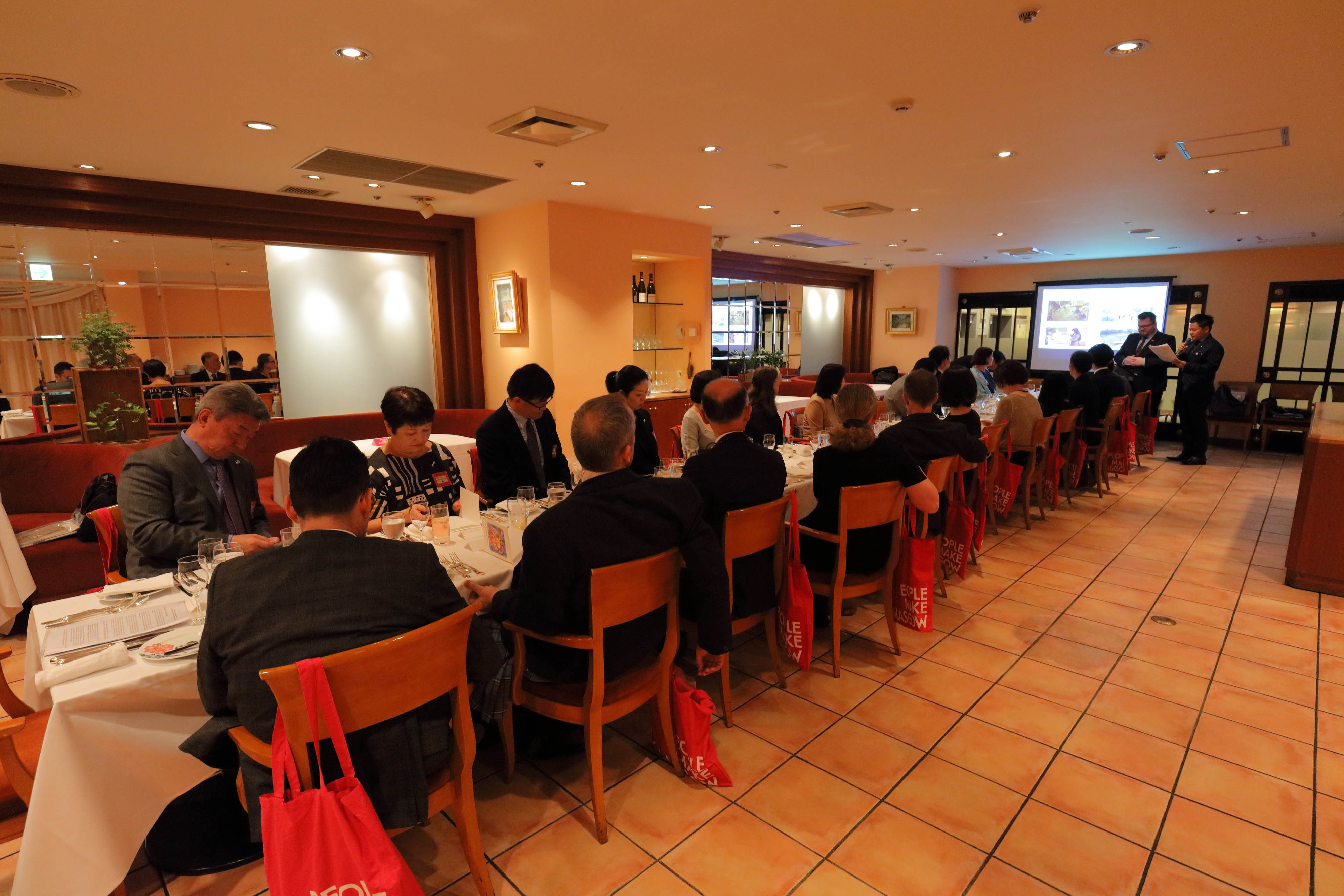 Guests enjoyed a whisky and gin tasting courtesy of Suntory – who provided samples of Auchentoshan – and the Glasgow Distillery Company who supplied Makar Gin including its  Cherry Gin, which was named the 'UK's Best Flavoured Gin' at the prestigious World Gin Awards earlier this year.

April is the month of Sakura (cherry blossom) in Tokyo so this seasonal reference was not lost on guests.The tasting was led by journalist Takeshi Kosaka who is also the author of a UK gin and whisky guide.

The Scottish Salmon Company provided Scottish Smoked Salmon and the Island Foods Company contributed Scottish langoustines for the dinner, which reinforced a Taste of Scotland. Guests also received a sweet treat in the form of the iconic Tunnock’s caramel wafer.

A suite of films showcasing Glasgow’s cultural, creative, business and inward investment credentials was shown during the evening and a specially curated ‘Tokyo Edit’ of music from Glasgow bands past and present also played throughout the night.

A pocket ‘Glasgow calling card’ (concertina leaflet) in Japanese and highlighting the Burrell Collection on one side and destination highlights on the reverse was distributed to Mainichi Shimbun, VisitBritain, British Council, SDI and Glasgow Life guests.

Going forwards, a programme of rich content on the Burrell and destination Glasgow will be produced on digital platforms targeting those with an active interest in British culture.

Glasgow Life will also continue to liaise with colleagues at SDI Tokyo, the Scottish Government and VisitScotland around maximising opportunities from Scotland competing in the 2019 Rugby World Cup in Japan.

Cllr McDonald added: “We have an ambitious Tourism and Visitor Plan to 2023 which is focused on bringing one million more tourists to our city over the next five years and cementing Glasgow’s position as the gateway to Scotland.

“Our touring exhibition of the Burrell in Japan provided us with an outstanding opportunity – the first in more than a decade – to speak to Japanese consumers, media, investors and travel trade about the many things that Glasgow has to offer and I hope that we will welcome more Japanese visitors in the years ahead.”