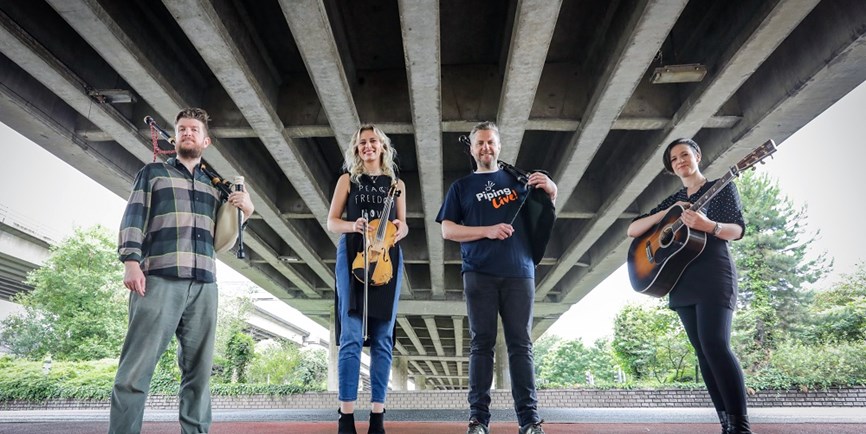 This year’s Piping Live! got underway this weekend and as Scotland enters a new phase of freedom, the Glasgow festival is set to host another seven days of world-class performance and piping competition between now and Sunday, 15 August.

A number of exciting in-person shows are being staged for up to 1,200 attendees as part of the annual event at The National Piping Centre, alongside a rich programme of online concerts, with more than 10,000 people from 20 countries from around the world expected to tune in.

Now in its 18th year and normally annually welcoming over 30,000 attendees to Glasgow, Piping Live! is the world’s biggest piping festival. For 2021 a hybrid approach sees the festival continue to champion Scotland’s native instrument with a packed programme of performance, music sessions, recitals, competitions, book launches and workshops.

The festival kicked off in style at the weekend as Angus MacColl was crowned winner of the prestigious Silver Chanter 2021 – performing MacCrimmon Piobaireachd against five other top players.

The educational element of the festival, Learn @ Live!, is hosting a series of workshops and masterclasses through the week, with people from countries including Malta, Japan, the US and Canada signed up to brush up on their piping skills with the Piping Centre’s world-class tutors.

Other in-person performances include the popular Lunchtime Recital Series, while sessions from emerging talent will take place on four afternoons in collaboration with the Royal Conservatoire of Scotland.

Piobaireachd of the Day recitals, sponsored by the Piobaireachd Society, will welcome experienced pipers to perform and discuss interpretation and delivery of this great music and A Scottish Pipe Band Showcase will feature a combination of quartets and pipe and drum duos on Tuesday.

The festival’s exclusive, online-only content includes Come & Try Pipes online session tonight and four piping book launches. Also taking place online is Karafolkie sessions, curated by Jenn Butterworth, which will give people the chance to play along with some of the best musicians on the Scottish music scene.

A number of exclusive international showcases will also be streamed and The National Youth Pipe Band of Scotland’s will air a special pre-recorded concert on Saturday.

Finlay MacDonald, Artistic Director for Piping Live!, said: “This year’s Piping Live! festival has got underway in fantastic style as we saw the very best pipers alongside up and coming talent impress and entertain over the weekend. We’ve got so much more to come and this week will be jam-packed with a unique mix of unforgettable Scottish and international performances.

“People have been quick to snap up in person tickets and we’re grateful for the unwavering support from local audiences as we mark the beginning of new freedoms for music lovers in Scotland. For our international followers, it’s fantastic to see so many take up the opportunity to experience Glasgow’s Piping Live! from their corner of the world.”

Councillor David McDonald, Chair of Glasgow Life and Depute Leader of Glasgow City Council said: “There won’t be a fan of piping around the world who will not be looking forward to the start of Piping Live!. Every year exceptional musicians perform and compete at Piping Live! and the audiences who see them play live or online this year are in for an unforgettable celebration of piping, pipers and Scotland. The team who organise the festival each year deserve great praise for delivering what I am sure will be another fantastic Piping Live!”

Paul Bush OBE, VisitScotland’s Director of Events, said: “Piping is a quintessential part of Scotland’s identity and it was great to see Piping Live! return over the weekend with its hybrid festival. With its fantastic programme of world-class performances, competitions and recitals, there is still plenty for people to enjoy over the next seven days, whether that’s in person or online.

“Scotland is the perfect stage for events and the EventScotland is delighted to be continuing its support of Piping Live! in 2021 to help not only bring great entertainment but also a platform for pipers and drummers to perform to audiences both in Glasgow and around the world.”

Piping Live! is supported by Glasgow Life and EventScotland. Tickets for both online and in-person shows start at £5, up to £17.50, while online festival passes are available for £65.

The ticketed concerts are seated and socially distanced with the venue undergoing extensive cleaning and ongoing COVID safety checks, with enhanced hygiene measures in place in strict adherence to government guidelines. Online shows are available to view for one week after they are first streamed.

The festival’s Street Café has moved inside for 2021, giving people the chance to sample some great Scottish food and drink including Brew Dog beer, while an outdoor bar will be open all this week, allowing people to drop in for a drink.

Piping Live! will run until Sunday 15th August 2021. View the full programme and buy tickets on the Piping Live website.

How to build a digital marketing plan