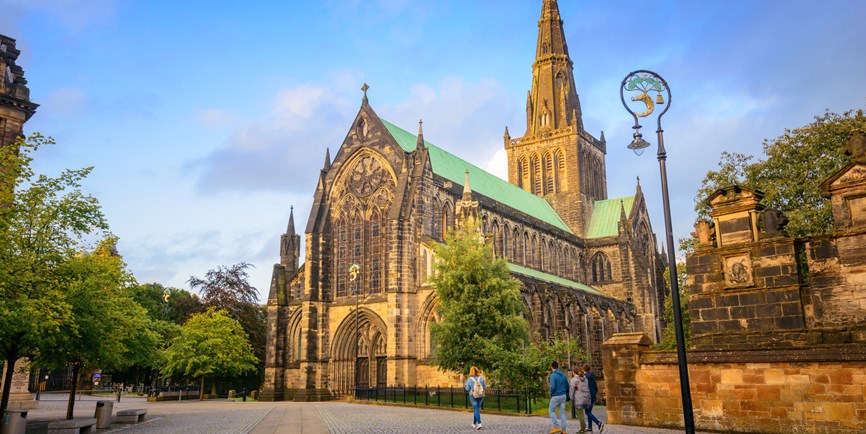 Glasgow has had a love affair with film throughout the ages, once boasting over 110 cinemas within the city limits. This passion for cinema has continued to modern-day, with one of the UK’s top film festivals held in the city every February, since 2005.

With lockdown having seen us binge boxsets and embark on movie marathons, you may be looking for your next film fix. Luckily, this year’s Glasgow Film Festival is going virtual, ensuring you can see some of the newest releases live and direct within your own living room.

Glasgow Film Festival 2021 will look a little different this year and will welcome more new audience members than ever before with an online streaming site. The festival programme includes six world premieres, two European premieres and 49 UK premieres.

The festival will run from February 24 - March 7 and tickets are on sale now. Highlights include the UK premiere Creation Stories, written by Irvine Welsh. Starring Ewen Bremner, it charts the rise of the infamous founder of Creation Records, Alan McGee. David Whitney’s Killing Escobar, which reconstructs Scottish ex-SAS operative Peter McAleese’s mission to assassinate Pablo Escobar, will also feature. And the UK premiere of Kevin Macdonald’s eagerly anticipated The Mauritanian with an all-star cast headed by Jodie Foster and Benedict Cumberbatch will be screened too. Plus the first feature film ever shot in the Uists, Limbo will have its Scottish premiere as part of the programme. Horror fans will be pleased that FrightFest is back too.

Glasgow, with its incredible range of architecture and unique grid street system, has drawn directors and production companies from across the globe to film in its streets, parks and buildings for both television and the silver screen.

From blockbusters to the hottest dramas, there is something for everyone. Once lockdown restrictions lift and it is safe to do so, why not book a trip to the city and check out Glasgow’s top filming locations for yourself.

One of the biggest film releases of 2020, the Steven Spielberg and Sam Mendes, Oscar award winning film, 1917, used the Govan Graving Docks at the River Clyde as a backdrop for the filming of the WW1 epic, which stars Benedict Cumberbatch, George MacKay and home-grown talent Richard Madden. What’s more, the setting isn't the only Glasgow link, as the film was co-written by Glaswegian screenwriter Krysty Wilson-Cairns.

The Fast & Furious movie franchise returned to Glasgow to film for the spin-off Hobbs & Shaw (released August 2019), bringing superstar Idris Elba to the city. This time, the cars and motorbikes zoomed through the streets of the city centre and Merchant City, as Glasgow doubled as London. The cast and crew first filmed in Glasgow in 2012 for the 6th installment of their hugely popular franchise, with the city's financial district and Broomielaw area used as the location of filming for many high-octane car chases.

One of the most exciting set pieces in the Brad Pitt zombie apocalypse movie World War Z took place on George Square and Cochrane Street. The beauty of George Square’s buildings – most notably the City Chambers – has resulted in this becoming the city’s most filmed location.

In 2011, several of Glasgow’s steep streets were used by the Wachowskis whilst filming Cloud Atlas to replicate 1970s San Francisco. It’s at the junction of George Street at Montrose Street that Halle Berry’s character attempts to evade capture from an enemy targeting her, in this thrilling time-travelling tale.

The arthouse alien film Under the Skin is set in Scotland. The director used hidden cameras to capture unsuspecting Glaswegians’ reactions to the main character’s (Scarlett Johansson) actions, included scenes outside Celtic Football Club, Buchanan Galleries and the Trongate.

All available to watch in the UK on Amazon Prime Video

The hugely popular TV show, Outlander, has made stars of its cast members, as well as of Scotland’s scenery and castles. You can also enjoy some Glasgow-spotting as the city has provided the backdrop for many of the fantasy-romance show’s memorable scenes. City locations used in the latest and previous seasons include Kelvingrove Park, which doubled for Boston Park, the University of Glasgow, which doubled for Harvard University, and John Street at the City Chambers, where Claire and Frank got engaged and the medieval Glasgow Cathedral, which doubled as a 1740s Parisian, ecclesiastical hospital - L'Hôpital des Anges.

Want to set – jet more of Outlander? A new digital audio guide by Geotourist, in association with VisitScotland, allows Outlander fans to immerse themselves in the adventure of the TV show, either at their home or at the filming locations. The audio tour includes Scottish filming locations and landmarks from Seasons 1 to 4.

Both Available to watch in the UK on Sky TV

Many BBC dramas have been filmed in the city including Guilt, The Replacement and The Cry. Most recently filmed was The Nest, based around a couple living in Glasgow who enter into a surrogacy pact with a teenage girl. The thriller stars Scottish talent Martin Compston and Mirren Mack, as well as Sophie Rundle of Peaky Blinders fame. City spots captured on screen include Glasgow City Chambers, SSE Hydro, Kibble Palace, Buchanan Street, as well as a beautiful home called Cape Cove, just outside of Glasgow in Argyll.

Check BBC iPlayer for details on whether still available to stream

One of the most historic areas of Glasgow has doubled as Gotham City for the filming of superhero blockbuster The Batman. Filming at the Glasgow Necropolis and Glasgow Cathedral area took place in February 2020. A stunt double for Robert Pattinson, who plays the caped crusader, was spotted zooming around the area on the 'bat bike'. Check out the latest teaser trailer and spot the Glasgow Necropolis!

Release date set for March 2022 (may be subject to change)

Scottish film director Jon S Baird’s new film Tetris, starring Taron Egerton has also begun filming in Glasgow, in the Trongate area of the city and also Morrison Street in Tradeston. Both settings have been transformed into 1980s Moscow.

While you are discovering or rediscovering Glasgow on screen, why not make a night of it with some delicious food and drink from the city!

Glasgow restaurant favourite Six by Nico operate their own home dining platform Home-X where you can pre-order a Home by Nico box for selected weekend delivery dates to most UK postcodes. This month’s theme for their four-course ready to eat dinner is ‘The Hebrides’. They also deliver wine, cheese and vegan dining experiences too. Visit the Home-X website to see the menu and book.

Instead of popcorn why not snack on some delicious traditional sweets from Glickman’s, the city’s oldest sweet shop that deliver to UK-wide addresses. Create your own pick and mix from boiled sweets and tablet to homemade Macaroon Cake.

For drinks head to Drygate’s online shop, to order beer from the UK’s first experimental brewery. Pick from individual beers or purchase a mixed case to sample a few of their eclectic range.

Glasgow Distillery has you sorted for spirits with a range of drinks made in the city including Glasgow 1770 whisky, Makar Gin and G52 Vodka. Visit their website for more details.

For more information and inspiration for things to see and do in Glasgow, when it’s safe to visit, check out: peoplemakeglasgow.com

Glasgow Life is an independent charity that provides culture and leisure services to citizens and visitors to Glasgow on behalf of Glasgow City Council.

How to build a digital marketing plan